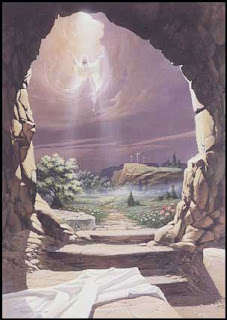 Have you not wondered to yourself why the resurrection matters? Or is it something that you accept as important on faith alone?

Well I can tell you that the empty tomb is truly the fundamental of all our faith. That we will not be floating off to heaven, in fact physical resurrection is something we can all expect after our deaths, whether we are righteous or wicked.

Jesus' Resurrection is important for two reasons. Firstly, Having resurrected Jesus showed himself to hundreds of people, giving evidence of the fulfillment of what he had said previously “Destroy this temple and in three days I’ll raise it up. [John 2:19]. Also in rising he showed that God's power was with him. Not only over his friends, but over himself. God raised him! Now Satan doesnt have this power, he can only destroy [there is theological debate over how powerful Satan is, despite what we may hear in the media I truly doubt that Satan is equally as powerful as God, especially when it comes to raising the dead to life]. In having Jesus rise from the dead, he [God] would not only have defeated death itself, he would have quelled any doubt to the true nature of Jesus. With confidence the disciples (who had seen him die) could tell others that Jesus was indeed the Messiah.


The people of Israel had this expectation (with foundation) that the Messiah was to be Israels true King, who would destroy all Israels enemies and rule the world from Jerusalem. So seeing and hearing a humble carpenters-son claim to be the Son of God, despite his many years in the synagogues, would be a step too far. It would be like some guy on youtube spending day after day making prophecies, claiming to be "anointed", when in reality he worked in MacDonalds. We have the same desire to be held in awe, have all our dreams come true at once, and to be able to say "have at you sir" to our enemies. This is what Jesus claimed to be, he claimed divinity, and thus many hated him. Those people hated him because he was living proof that all they had held dear was a lie. All their expectations were vanity, and that they really were no longer God's people. After all, if he wasn't going to destroy Rome and make Israel powerful again, then what were they to God? His bride or his ex?


What they didn't know, was the true nature of Israel, they were so blind, everytime a prophet spoke they closed their ears. They were not being blessed anymore because they were so self centred. The true purpose of Israel was to lead the world BY EXAMPLE. Notice that everytime Israel walked with God they were blessed. The true power of Israel came from righteousness not by simply being dependent on God "Oh God please save us". Had Israel turned, and accepted its nature as the example for the world to follow, Israel truly could have been the most powerful nation on Earth. Its possible that every nation on Earth would have looked at Israel and said "Lets abandon our gods and worship Yahweh", and this would have been that Global paradise, a new Eden! (Let me just point out that had this been the case, sin would have still existed, and God still would have had to have judged, Jesus would have had to die and be resurrected) Instead Israel said "Lets abandon Yahweh and worship other gods".


Where does the resurrection fit into this? Well Israels self-centredness missed out the prophecy of the suffering servant, and how this was Israel's salvation! You see, God married Israel,

"I remember your first love, your devotion as a young bride, how you followed me in the wilderness, in an unplanted land." Jeremiah 2:2


Now as such, God would never just abandon Israel, after all that would be a kind of divorce, and God being righteous could never divorce Israel. Well, okay he did, but for adultery:

"People of this generation, listen closely to the Lord’s word: Have I been a wasteland to Israel or a land of dense darkness? Why then do my people say,
“We have wandered far away, we’ll come to you no longer”?

Does a young woman forget her jewelry or a bride her wedding dress? Yet you have forgotten me days without end! So skilled are you at pursuing lovers that you instruct even the most wicked." 2:31-33
Why then is this important? Think of it as God ending one plan and resorting to another. God gave Israel a chance to redeem itself, and she failed [Its hard to understand, but Jesus was always plan A not B]. It was as if God was allowing the covenant to run its course, to allow Israel to fully condemn itself by its nature. Those who live by the law, must die by the law.

Now, Jesus enters the mix, the pure human, not born by the old covenant or from the line of Adam but by God himself in the womb of an undefiled Israelite. Born of purity, lived in purity. Jesus of Nazareth. He was the only human being on this Earth who being human had sin nature, but was capable of not sinning. Why was he sent? To redeem Israel! He said it himself:


From there, Jesus went to the regions of Tyre and Sidon. A Canaanite woman from those territories came out and shouted, “Show me mercy, Son of David. My daughter is suffering terribly from demon possession.” But he didn’t respond to her at all.
His disciples came and urged him, “Send her away; she keeps shouting out after us.”
Jesus replied, “I’ve been sent only to the lost sheep, the people of Israel.”
But she knelt before him and said, “Lord, help me.”
He replied, “It is not good to take the children’s bread and toss it to dogs.”
She said, “Yes, Lord. But even the dogs eat the crumbs that fall off their masters’ table.”
Jesus answered, “Woman, you have great faith. It will be just as you wish.” And right then her daughter was healed. Matthew 15:21-28

So we, as gentiles, are the dogs, eating the crumbs. Despite Israel's adultery, God worked his socks off to save her. What happened? Israel even then rejected Jesus, because Jesus did not meet their expectations. Israel fundamentally denied everything it claimed to love, even Abraham, Moses.

This next passage is viewed completely out of context, but I will present part of it as evidence of what I am saying. I believe Jesus used it to demonstrate a point, not that Hades is ACTUAL torment. but something more important:

27 “He answered, ‘Then I beg you, father, send Lazarus to my family, 28 for I have five brothers. Let him warn them, so that they will not also come to this place of torment.’

I will keep the versification in here. Lazarus here represents the righteous, in order to illustrate point Jesus had these people be conscious. It was well known at that time that Hades [Greek] was simply the place of death, as it was Sheol. But many pharisees taugh consciousness after death, basically following some apocryphal stuff, and Platonism. Anyway, you could view Lazarus as a kind of representation of Jesus [in lieu of 30] and the rich man as a generic character [camel, eye, needle ;). Jesus seemed to already know that Israel would reject the resurrection, which is why he says 31. In order to understand this, you simply have to understand, that the OT is filled with prophecy about Jesus! Now they are too numerous to list here but a link should suffice [I will also list them in another post] Fulfilled prophecies of Jesus in the OT.

The resurrection was prophecied in the Psalms:

"because you won’t abandon my life [Soul, Body] to the grave;[Sheol, place of the Dead] you won’t let your faithful follower see the pit." Psalm 16:10

Jesus is therefore saying, that even if he is resurrected, fulfilling prophecy! They still won't be believed. Because they have never believed before.

Yet read this:" The Swiss Theologian Karl Barth said: 'Do you want to believe in the living Christ? We may believe in him only if we believe in his corporeal resurrection. This is the content of the New Testament" [emphasis added]. {World Aflame p. 129}

This is where I abandon Israel myself. I hope I have suitably emphasised the unruliness of Israel, my intention was to display why Jesus had to come. Succinctly I will endeavour to summarise: Jesus came, because Israel could not and would not save itself. and God had promised that he would save Israel [Isaiah 43]. God was fulfilling in Jesus, a promise.

This is the power of the resurrection. Which Israel had denied [but luckily Revelation shows that those Israeli's who can believe will believe].

So why is the resurrection the key factor, It promises salvation, if God can raise from death to life - he demonstrates true Godhood as creator and sustainer. In Jesus, he promises that through him he will resurrect those who believe, through his death and raising to life.