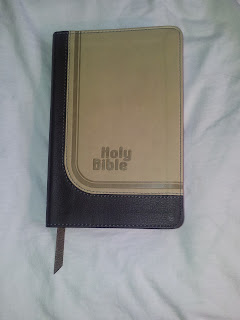 Alot of the time, I am bickering and moaning about various bible translations. Often talking about cults of personality that preach that the Bible is inerrant in its translated form. Well today I am going to preach postively about a translation, and do a kind of bibledesignblog-esque review.

As the title suggests, this review is going to be about the Common English Bible. Its an example of a bible that gets alot right - especially in the Old Testament. Of course it gets some things wrong, as do all bibles, and I should add that I am wholly inadequate to call any bible "wrong", but in my humble opinion it has some flaws. But less than most!


God so loved the world that he gave his only Son, so that everyone who believes in him won’t perish but will have eternal life. John 3:16 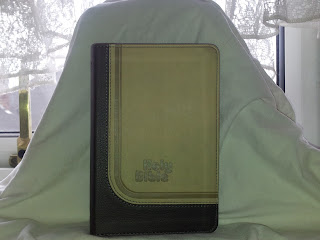 Its not over the top, you are likely to find the same traditional verses you would in say, an ESV -so long as they are understandable in the ESV. Otherwise they are rewritten to be understandable by, I believe a 7th Grade readership (Year 8 in the UK). Many feel this to be a cop-out, but this is where I appreciate it. To not boast, I have a high reading level, I could read say, Origin of Species, or Pilgrims Progress, without my eyes bleeding. But why struggle, if the Bible CAN be written for 12 year olds and still be the Bible, why have a high level theological tome at all?

Ezekiel has always been a hard one for me, He's my favourite prophet, but the beginning of the book is extremely hard reading, especially to comprehend. I found it much easier in the CEB.

The voice said to me: Human one, stand on your feet, and I’ll speak to you. As he spoke to me, a wind came to me and stood me on my feet, and I heard someone addressing me. He said to me: Human one, I’m sending you to the Israelites, a traitorous and rebellious people. They and their ancestors have been rebelling against me to this very day. I’m sending you to their hardheaded and hard-hearted descendants, and you will say to them: The Lord God proclaims. Whether they listen or whether they refuse, since they are a household of rebels, they will know that a prophet has been among them. Ezekiel 2:1-5 CEB

And he said to me, “Son of man, stand on your feet, and I will speak with you.” And as he spoke to me, the Spirit entered into me and set me on my feet, and I heard him speaking to me. And he said to me, “Son of man, I send you to the people of Israel, to nations of rebels, who have rebelled against me. They and their fathers have transgressed against me to this very day. The descendants also are impudent and stubborn: I send you to them, and you shall say to them, ‘Thus says the Lord God.’ And whether they hear or refuse to hear (for they are a rebellious house) they will know that a prophet has been among them. ESV

The english in the ESV is evidently for a higher reading level:" transgressed" , "impudent", "stubborn". Read through both and see which one you prefer. I would say that both are equally valid in my opinion. Although I prefer the easier read of the CEB, simply because it is readable.


The NEB/REB is my favourite translation, and it's a higher reading level than the ESV in some ways. So its not just a matter of vocabulary. Its stated that the CEB is made to be read, just like the KJV was. Thats also why there is a lack of theological terminology, the last thing you want is for a person to be listening to a passage and wondering what words mean, thus being distracted. This is a plus for the CEB, it means that rather than using a word like propitiation, it has to define propitiation:


Through his faithfulness, God displayed Jesus as the place of sacrifice where mercy is found by means of his blood. He did this to demonstrate his righteousness in passing over sins that happened before, Romans 3:25 CEB

[Christ Jesus] whom God put forward as a propitiation by his blood, to be received by faith. This was to show God's righteousness, because in his divine forbearance he had passed over former sins. ESV

So you see the benefit here, instead of hefty theology terms, we have terms defined for us. Its a good idea, they even passed over terms like "atonement, because it was felt that an invented theological term was no way going to surpass an actual explanation. Respect to the translators. I purchased this from Amazon, Common English Bible .

(Above) This Bible isnt leather, its a kind of imitation leather, Decotone, its high quality, and is nothing like the sort of thin, brittle stuff you get on a gift and award bible, its warm, soft and pliable. Its as good as leather, perhaps wont last as long, but it will take alot of damage. Its similar material to my HCSB ultrathin [on the left]. The text is smaller, as you will see. but if you have reasonably good vision you should be okay. 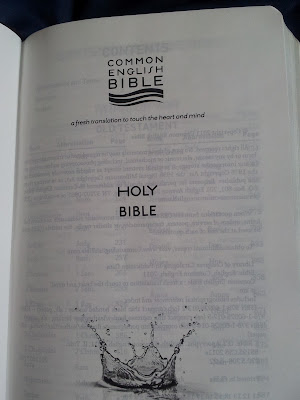 Theres something about this title page [Above]. That splash! It denotes high quality, how many bibles have a printed photograph? 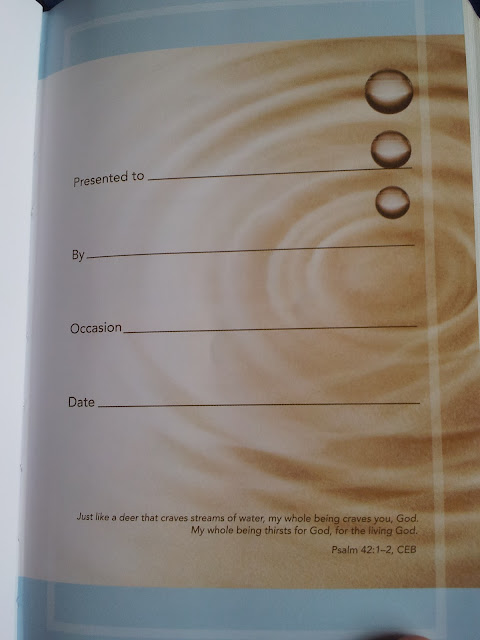 Apologies for the tip of my finger at the bottom. This presentation page is a different sort of paper, and needed assistance. Its glossy, very nice. I like the verse at the bottom, again, classy. 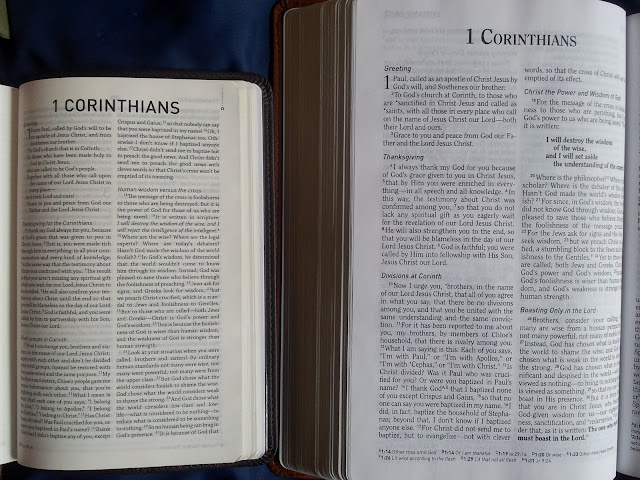 [CEB left, HCSB right]. I love the HCSB, but the font is ghastly and gives me a headache. In purchasing bibles I am going to read, I pray for decent font. Its something I have to give kudos to the CEB printers, and something I rebuke the printers of the NCV and HCSB for. If you notice on the HCSB, OT quotes are bolded, CEB they are italicised. Either way, the quotes are denoted, although it looks a bit prettier in the HCSB despite the font. differences shown below.

I wanted to compare the CEB with the HCSB because both endeavour to make the Bible as accessible to the reader, whilst the HCSB tows the line between formality and dynamism, the CEB tends towards the latter. I hope this may help you to make a choice for a bible that suits your reading level and concentration. I won't really go over the CEB's use of "Human One" instead of "Son of Man", or anything else that certain christian sects would rant and rave about, although I have mentioned it. The CEB is not yet my number one, but as an up to date translation it may just get there. I for one cannot think of those flaws I mentioned earlier. I love it! I hope you enjoyed the extra addition of lots of photos. I had to make the effort to do this wonderful translation justice.

God bless you all!

The Constantines said…
I wanted to comment juts to thank you for actually taking the time to discuss the CEB. I use several translations, but was not too familiar with this one. Do you know, by the way, where I could find some info on their choice of "Human One?"

I also wonder about the Ezekiel passage you quoted. ESV: the spirit entered me and stood me. CEB: a wind stood me on my feet. It seems that there is a great difference between an outer wind and an inner spirit. I wonder why they chose wind, not spirit? Maybe the idea of being lifted up from the inside (like wind inflating a balloon?) is less visual than a wind coming from the outside and standing someone up. That, too is strange, right? Doesn't wind usually knock things down?

Christopher Haywood said…
Hey there, I've come to the conclusion that these Bible translations are taking liberties with the Word of God, and as such am far less inclined nowadays to give ear to them.

There definitely is a big difference between wind and spirit, essentially its taking the entire personality of the Holy Spirit and turning it into a created thing. I mean we nowadays KNOW it was the Spirit, so why would they choose that, it seems to me they wish to demote the holy spirit into some kind of animalistic, natural thing, which is entirely wrong.

I would say, at this point, that whilst the CEB gives a very, visual and dramatic depiction of the event, its wholly theologically wrong. The King James agrees with the ESV here (because the original rendering used by the ESV comes from the KJV).

KJV Eze 2:2 And the spirit entered into me when he spake unto me, and set me upon my feet, that I heard him that spake unto me.

The wind does indeed knock over, my friend, you have a keen insight yourself. Two witnesses agree here, the CEB is wrong.

Unknown said…
I am undecided about this translation myself. I do like how smoothly it reads, but there are places that I just don't like the rendering. Might be my bias towards the KJV. Does the HCSB come across as more orthodox? Does it read as smoothly as the CEB? I am currently looking for an easy to read Bible for daily reading, but just haven't found one that I like enough to make the switch.
2 April 2014 at 08:44