At risk of sounding paranoid, I think they're out to get us.

I remember when I was younger, living in the great city of Stoke on Trent, looking up at the clear blue sky and seeing a plane going over, a thin vapour trail behind it, before rapidly disappearing.

The difference in 16 years is striking, this is how a plane 'CON-trail' used to look:

Of course not every trail behind a plane is a chemtrail, if you see a thin white line behind a plane, watch it and see what happens, if it begins to expand, billow and grow then its a chemtrail, it will begin to form into a flat cloud and will become a haze in the sky masking the sunlight.

The mainstream media ignores this, and the masses lump chemtrails in with contrails..through ignorance. The furthest it will get is local news or a documentary:

Now for a bit of Rense:

"If a mass of barium is vaporized in space, within seconds much of the barium becomes ionized by the suns rays, producing a highly reflective ionic cloud which deflects newly arriving solar energy back into space, thereby preventing the ground from warming to the temperature it otherwise would have attained."

Its odd, most chemtrails I have seen have been in the morning, and at dusk. What to make of that? I am no expert on chemtrails, so I cant say.

"The cloud cover that is generated causes the surface of the earth (land or sea) to be cooler than otherwise.

Is it not odd, that visibly the frequency of chemtrails has increased recently, whilst most of the US has been covered in snow storms? and that temperatures have been rapidly fluctuating?

Personally, I think global warming is bullshit, and I think the whole aim of this is to convince us that its real, and milk us of every penny we have, with the added effect of us becoming ill from the chemicals slowly but surely. It is well known that the particles fall to the earth, and I have been witness to powdery fog that descends a few hours after a spate of trailing.

This trailing is real, and it needs to be researched by as many people as possible. Its the most immediate "at your doorstep" threat from 'them' whoever they may be.

Or maybe you want to see this everyday til the day you die: 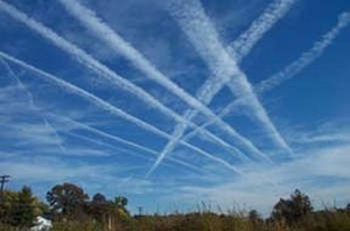 This is my photo, camera quality not the best!
Labels: chemtrail conspiracies David Icke. Alex Jones